As a young medical resident, I encountered a patient suffering from spontaneous coronary vasospasm and was puzzled by these dramatic alterations in vasomotion. This encounter piqued my interest in understanding the drivers of vascular reactivity. In a paper published in the , my colleagues and I revealed a role for superoxide production in the vascular dysfunction associated with hypercholesterolemia. Subsequent work by our group and others has unveiled complex associations between ROS generation and vascular disease. 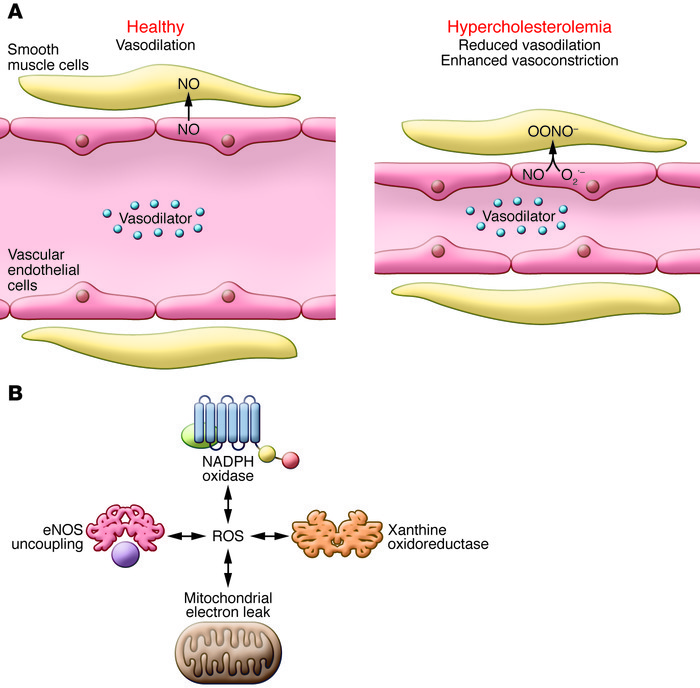 () Healthy vascular ECs respond to the presence of vasodilators by producing NO, which diffuses into smooth muscles and promotes vasodilation. Under hypercholesterolemia conditions, vascular ECs produce superoxide in addition to NO in response to vasodilators. Superoxide and NO interact within vascular ECs to produce OONO–, which is a strong oxidant that contributes to vascular dysfunction in individuals with hypercholesterolemia. () Interplay between various sources of ROS in vascular cells. NADPH oxidase–produced ROS can oxidize the eNOS cofactor tetrahydrobiopterin (purple), which uncouples these enzymes, resulting in ROS production. NADPH oxidase–associated ROS also disrupt mitochondrial electron transfer, leading to ROS production. Furthermore, ROS from other sources promote the formation of ROS by xanthine oxidoreductase. This feed-forward nature of ROS production promotes several pathophysiological states.