Patients with infectious mononucleosis (IM) undergoing primary EBV infection show large expansions of EBV-specific CD8+ T cells in the blood. While latent infection of the B cell pool is quickly controlled, virus shedding from lytically infected cells in the oropharynx remains high for several months. We therefore studied how responses localize to the tonsil, a major target site for EBV, during primary infection and persistence. In acute IM, EBV-specific effectors were poorly represented among CD8+ T cells in tonsil compared with blood, coincident with absence of the CCR7 lymphoid homing marker on these highly activated cells. In patients who had recently recovered from IM, latent epitope reactivities were quicker than lytic reactivities both to acquire CCR7 and to accumulate in the tonsil, with some of these cells now expressing the CD103 integrin, which mediates retention at mucosal sites. By contrast, in long-term virus carriers in whom both lytic and latent infections had been controlled, there was 2- to 5-fold enrichment of lytic epitope reactivities and 10- to 20-fold enrichment of latent epitope reactivities in tonsil compared with blood; up to 20% of tonsillar CD8+ T cells were EBV specific, and many now expressed CD103. We suggest that efficient control of EBV infection requires appropriate CD8+ T cell homing to oropharyngeal sites. 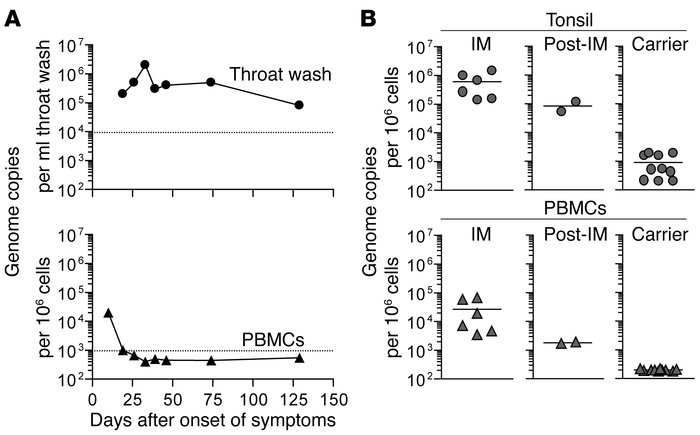 EBV genome load quantitation in IM patients, post-IM patients, and long-term carriers. () EBV genome copies in 1 ml of concentrated throat washing (upper panel) and 106 PBMCs (lower panel) from an IM patient (IM-171) from whom samples were taken during acute disease (days 0–14) and at intervals up to 4 months later. Upper limits of genome levels in throat washing and blood samples from healthy carriers are indicated by the dashed lines. () EBV genome copies were estimated in 106 tonsillar cells (upper panels) or 106 PBMCs (lower panels) from tonsillectomy patients who were either undergoing acute IM or recently recovered from IM (post-IM) or were long-term carriers.