Acquired predisposition to mycobacterial disease due to autoantibodies to IFN-γ

Acquired predisposition to mycobacterial disease due to autoantibodies to IFN-γ

Genetic defects in the IFN-γ response pathway cause unique susceptibility to intracellular pathogens, particularly mycobacteria, but are rare and do not explain mycobacterial disease in the majority of affected patients. We postulated that acquired defects in macrophage activation by IFN-γ may cause a similar immunological phenotype and thus explain the occurrence of disseminated intracellular infections in some patients without identifiable immune deficiency. Macrophage activation in response to IFN-γ and IFN-γ production were studied in whole blood and PBMCs of 3 patients with severe, unexplained nontuberculous mycobacterial infection. In all 3 patients, IFN-γ was undetectable following mitogen stimulation of whole blood, but significant quantities were detectable in the supernatants of PBMCs when stimulated in the absence of the patients’ own plasma. The patients’ plasma inhibited the ability of IFN-γ to increase production of TNF-α by both autologous and normal donor PBMCs, and recovery of exogenous IFN-γ from the patients’ plasma was greatly reduced. Using affinity chromatography, surface-enhanced laser desorption/ionization mass spectrometry, and sequencing, we isolated an IFN-γ–neutralizing factor from the patients’ plasma and showed it to be an autoantibody against IFN-γ. The purified anti–IFN-γ antibody was shown to be functional first in blocking the upregulation of TNF-α production in response to endotoxin; second in blocking induction of IFN-γ–inducible genes (according to results of high-density cDNA microarrays); and third in inhibiting upregulation of HLA class II expression on PBMCs. Acquired defects in the IFN-γ pathway may explain unusual susceptibility to intracellular pathogens in other patients without underlying, genetically determined immunological defects. 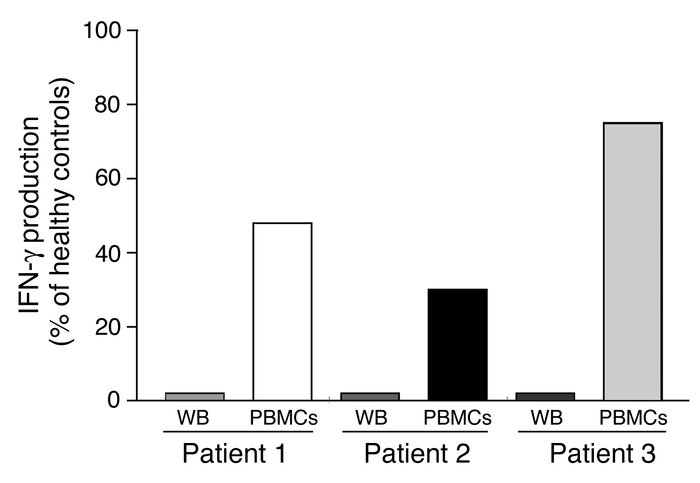 IFN-γ production in response to mitogen stimulation in whole blood (WB) and isolated PBMCs. IFN-γ was not detected in patients’ plasma derived from whole blood after stimulation with PHA (or PMA/ionomycin in patient 2), whereas large quantities of IFN-γ were detected when isolated PBMCs were studied in the absence of patient plasma. IFN-γ production in PBMCs is expressed as a percentage of that in blood of healthy controls studied in the same experiments. Supernatants from triplicate samples of whole blood or PBMCs were pooled for each patient and control and assayed in duplicate by ELISA. The coefficients of variation (CVs) in each assay were less than 5%.