Vascular development in the mammalian retina is a paradigm for CNS vascular development in general, and its study is revealing fundamental mechanisms that explain the efficacy of antiangiogenic therapies in retinal vascular disease. During development of the mammalian retina, hypoxic astrocytes are hypothesized to secrete VEGF, which attracts growing endothelial cells as they migrate radially from the optic disc. However, published tests of this model using astrocyte-specific deletion of Vegf in the developing mouse retina appear to contradict this theory. Here, we report that selectively eliminating Vegf in neonatal retinal astrocytes with a Gfap-Cre line that recombines with approximately 100% efficiency had no effect on proliferation or radial migration of astrocytes, but completely blocked radial migration of endothelial cells, strongly supporting the hypoxic astrocyte model. Using additional Cre driver lines, we found evidence for essential and partially redundant actions of retina-derived (paracrine) and astrocyte-derived (autocrine) VEGF in controlling astrocyte proliferation and migration. We also extended previous studies by showing that HIF-1α in retinal neurons and HIF-2α in Müller glia play distinct roles in retinal vascular development and disease, adding to a growing body of data that point to the specialization of these 2 hypoxia-sensing transcription factors. 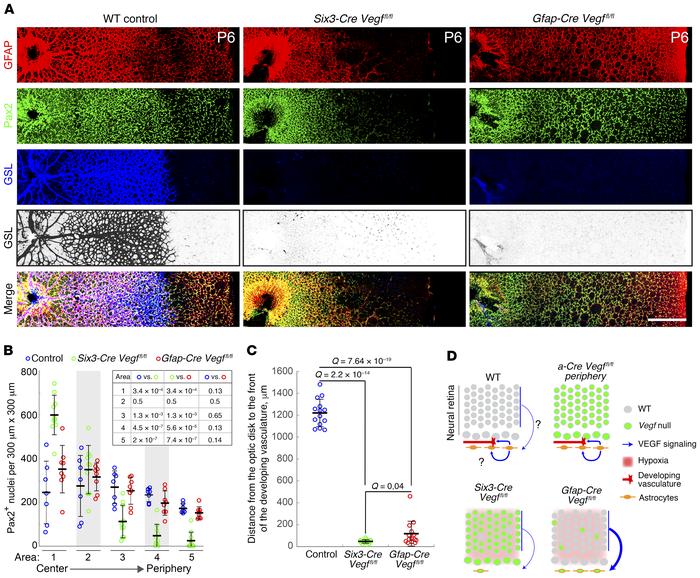 () Flat mounts of WT, , and retinas at P6, immunostained for astrocytes (GFAP and Pax2) and ECs (GSL). The latter is shown both in color and, for further clarity, in black and white with intensities inverted. The optic disc is at the left of each image, and the peripheral edge of the retina is at the far right. Scale bar: 400 μm. () Quantification of astrocyte radial migration at P6. The number of Pax2+ nuclei was counted in radial strips divided into five contiguous 300-μm × 300-μm squares, from the retinal center to the periphery. Each symbol shows the Pax2+ nuclear counts from 1 square; data show the mean ± SD. Seven to 10 radial strips were quantified per genotype. values for pairwise comparisons, calculated using 2-tailed unequal variance test adjusted for multiple comparisons using the method of Benjamini and Hochberg (), are presented in the inset table. () Quantification of EC radial migration at P6. The radial distance from the center of the retina to the growing vascular front (based on GSL staining) was measured on 4 to 8 retinas per genotype, for a total of 14 measurements per genotype. Data show the mean ± SD, and values were calculated with a 2-tailed unequal variance test adjusted for multiple comparisons using the method of Benjamini and Hochberg (). () Schematics of early postnatal retinas showing the cellular sources, vascular targets, and relative strengths of VEGF signaling inferred from the phenotypes of retinas with the indicated genotypes. Symbols are defined to the right of the 4 schematics. A question mark indicates uncertainty regarding the existence or strength of a VEGF signal. The neural retina is shown as it appears at approximately P3, with a ganglion cell layer that is distinct from an outer layer encompassing neuroblasts and future INL/ONL cells. Representative images are shown from experiments with 4 or more eyes per genotype.